Hierarchical models for galaxy formation as well as N-body/SPH simulations of the evolution of individual disk galaxies, predict an inside-out formation scenario for galaxy disks (see Muñoz-Mateos et al. and references therein). According to this scenario the formation of stars in the outer parts of the disks would have taken place recently. Extreme examples of this inside-out growth are the extended UV (XUV) disks discovered in ~20% of the nearby spiral galaxy population (Thilker al. 2005, 2007, Gil de Paz et al. 2005, 2007).

Given the low gas densities where the star formation in the XUV disks takes place, the XUV phenomenon is a challenge to our current ideas on the star formation threshold and law (Boissier et al. 2007). The main issue is then to identify the means to supply a rich reservoir of gas, whether through (tidal) removal of the ISM from the ordinary disk or infall/accretion.

For the majority of XUV-disks the source of outer disk gas is not obvious mostly due to the few HI studies performed so far. Gil de Paz et al (2007) find extended HI emission for all galaxies studied, while the contribution of the molecular gas is still unknown. Neither the HI kinematics nor samples of galaxies selected free from interactions has been studied so far. We have started this kind of study for specific targets in AMIGA sample. Below we present the results of the first of such studies.

We study the Kennicutt-Schmidt star formation law and efficiency in the gaseous disk of the isolated galaxy CIG 96 (NGC 864), with special emphasis on its unusually large atomic gas (H I) disk (rHI/r25 = 3.5, r25 = 1.′85). We present deep GALEX near and far ultraviolet observations, used as a recent star forma- tion tracer, and we compare them with new, high resolution (16′′, or 1.6 kpc) VLA H I observations. 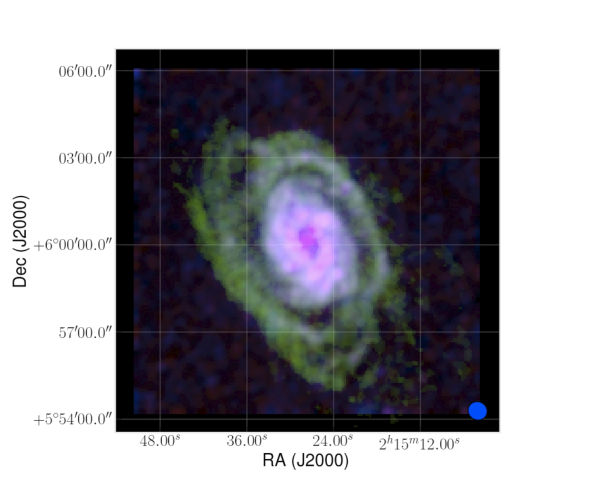 The UV and H I maps show good spatial correlation out- side the inner 1′, where the H I phase dominates over H2. Star-forming regions in the extended gaseous disk are mainly located along the enhanced H I emission within two (relatively) symmetric giant gaseous spiral arm-like features, which emulate a H Ipseudo-ring at a r ≃ 3′. Inside such structure, two smaller gaseous spiral arms extend from the NE and SW of the optical disk and connect to the previously mentioned H I pseudo-ring. 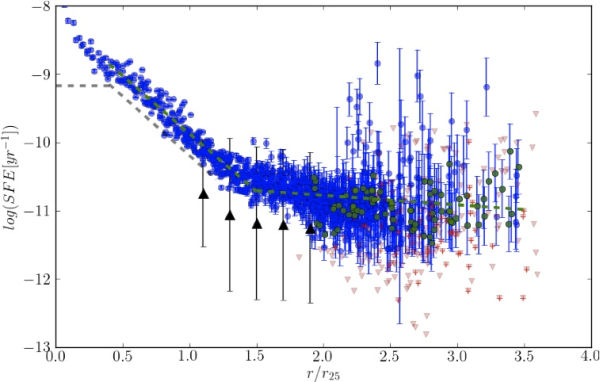 Fig. 2 Star Formation Efficiency (SFE) (in logarithmic scale) as a function of galacto- centric radius normalized by r25, up to r/r25 = 3.5. There is an apparent break in the SFE fit at around r/r25 = 1.5. Below r/r25 <0.4 the gas surface density is likely dominated by molecular gas and the correlation to the fit does not hold. Red data points correspond to regions whose Σgasis above the noise level but ΣSFR is an upper limit. Green circles represent the detected data points in the kinematically detached region in the SW (Espada et al. 2005).

We discuss about possible mechanisms that might be trig- gering the star formation in the outskirts of this galaxy, and we suggest that the constant SFE for such large radii r > 2 r25 and at such low surface densities might be a common characteristic in extended UV disk galaxies.