Linking sub-kpc scales with the environment of galaxies: the case HCG91c

Linking sub-kpc scales with the environment of galaxies: the case HCG91c

Understanding the details of the relationship between the galaxy properties and the environment is difficult. First, because several processes are usually coincidental, second, because different processes are best seen at different wavelengths, and third, because of the large range of physical scales that need to be understood – e.g. from kpc scales for the cold gas reservoirs, down to the sub-kpc scales of individual star-forming regions. Hickson Compact Groups (HCGs) are specially suitable targets as dense isolated systems composed of a few galaxies.

Galaxies in Hickson Compact Group 91 (HCG 91) were observed with the WiFeS integral field spectrograph as part of a campaign targeting the ionized gas physics and kinematics inside star-forming members of compact groups. In there, we discovery H II regions with abundance  offsets in this otherwise unremarkable star-forming spiral galaxy. In particular, the optical emission line analysis of this galaxy reveals that at least three H II regions harbour an oxygen abundance ~0.15 dex lower than expected from their immediate surroundings and from the abundance gradient present in the inner regions of HCG 91c. 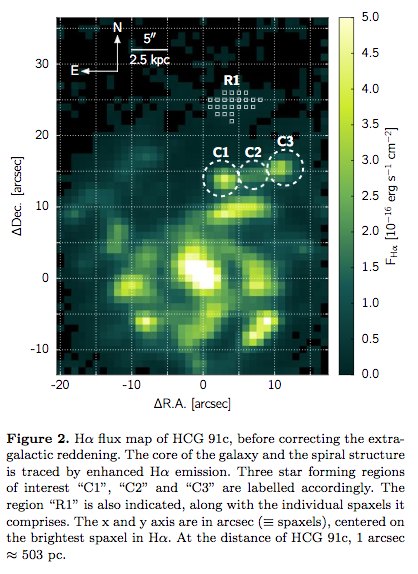 We combined our WiFeS observations with HI observations of HCG 91 from the Very Large Array and broad-band optical images from Pan-STARRS (Panoramic Survey Telescope And Rapid Response System): these suggest that HCG 91c is caught early in its interaction with the other members of HCG 91. We discussed different possible scenarios to explain the origin of the anomalous star-forming regions, noting that the spatial resolution of the WiFeS observations are not sufficient to strictly rule-out the possibility the influence of self-driven (rather than environment-driven) mechanisms. Follow-up observations with MUSE will allow us to do so (see Vogt+2017, A&A in press). 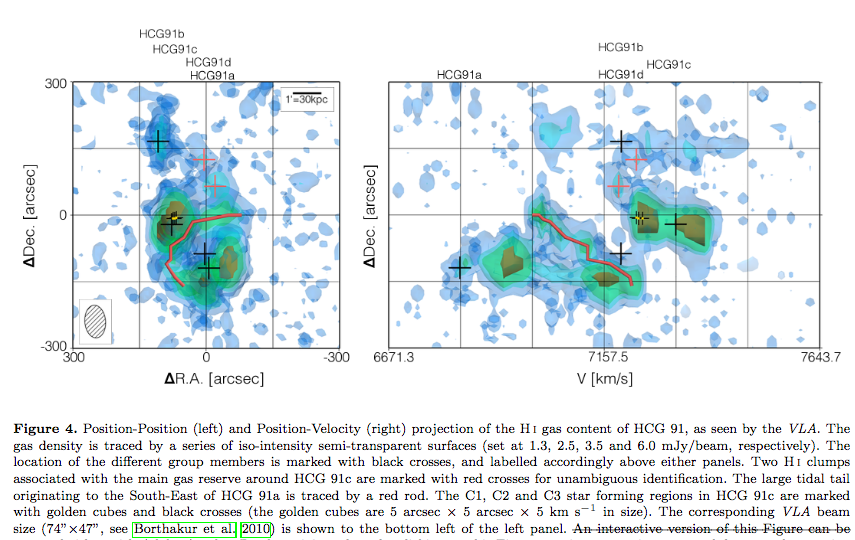