The class of galaxies known as UDGs (Ultra-Diffuse Galaxies) was identified by van Dokkum et al. (2015). Although low surface brightness galaxies have been studied for decades (some of which would now be classified as UDGs) the high abundance of these objects at the extremes of low surface brightness was not previously recognised. The Virgo and Coma clusters are now know to have many tens or even hundreds (depending on the exact definition used) of UDGs. Their prevalence is somewhat perplexing given that structures that are the mass of dwarf galaxies, but the size of L* galaxies would be expected to be rapidly disrupted in a cluster environment, yet the light distributions of UDGs are smooth, with very few exceptions.

Detecting UDGs in the field is extremely challenging because the galaxies density is much lower than in clusters so much more sky must be covered, but the same sensitivity is required. Leisman et al. (2017) circumvented this issue by looking for UDGs in the ALFALFA survey through their HI (atomic gas) emission rather than their star light. Though the UDGs do not immediately standout in terms of their HI emission, by identifying those HI sources that had optical counterparts that were barely visible in existing optical surveys (primarily SDSS), a class of HI-bearing UDGs, or HUDs, was identified. In total Leisman et al. (2017) 115 HUDs over approximate 1/6th of the sky covered by ALFALFA.

In this work we took this sample of HUDs and used it to estimate the total cosmic abundance of HUDs. We find that HUDs are much more abundant than would be expected by extending the relation between the host halo mass and the number of UDGs hosted (measured from UDGs in clusters and groups) down to dwarf halo masses, where HUDs are expected to reside. This indicates that there must be a break in this relation and we hypothesis that this likely occurs at the halo mass where UDGs switch from being a satellite population to a central population, as HUDs usually appear to be relatively isolated and thus must be central objects.

We also made comparisons with semi-analytic models (SAMs) and simulations of galaxy formation. While these are able to form UDG-like objects, at present they appear to be much more numerous than those found in the real Universe. These models must therefore be improved before they can be used to constraint the two currently favoured formation scenarios: high halo spin making central collapse more difficult, or repeated episodes of star formation driving out matter to large radii. 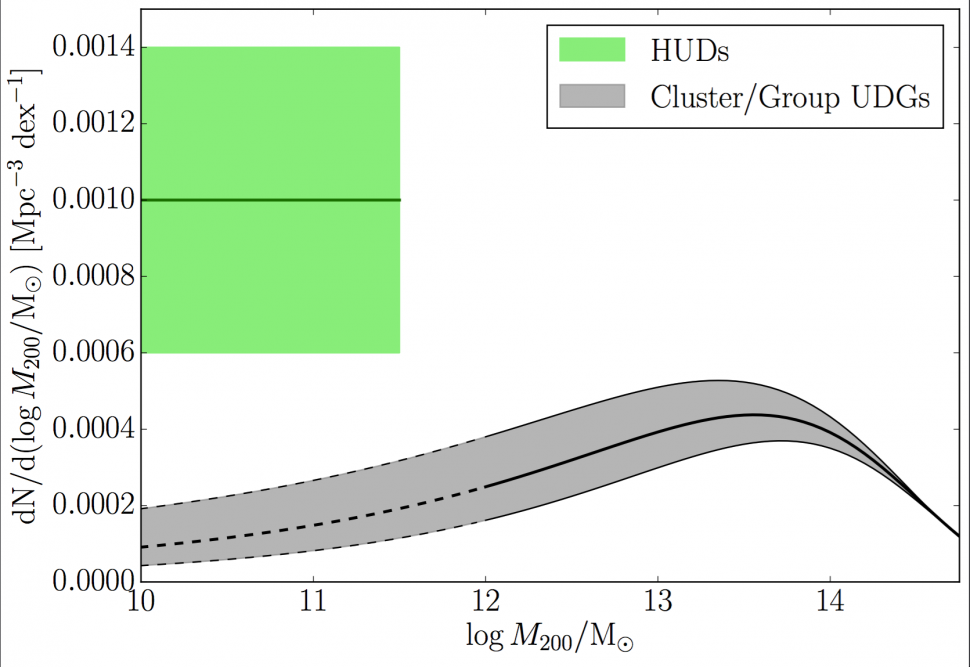 Figure: The number density of cluster and group UDGs (grey band) as a function of halo mass, estimated from the relation of van der Burg et al. 2017. The dashed region indicates where the relation has been extrapolated to lower masses. The green band shows the number density of HUDs if they are assumed to reside in halos of log masses between 10 and 11.5.