Several works in last years have shown that there is a growth in size of both early and late-type galaxies since redshift 2-3. Different scenarios have been proposed to explain this growth, including environmental dependent process, such as dry minor mergers, or secular processes, such as expansion of the stellar distribution as a consequence of mass loss driven by quasar feedback, stellar winds and supernova explosions.

Although minor mergers are the most popular explanation for the growth of galaxies in size, a dependence with environment is not clearly established, and different results have been found at both local and high redshift. Since field usually includes pairs and even groups of galaxies, interactions may have played an important role in the results found in previous studies.

Here, we study the stellar mass-size relation for the AMIGA sample of isolated galaxies. For comparison with our relation we used the local relation defined by Shen et al. (2003) from the Sloan digital sky survey (SDSS) data for both early and late-type galaxies. We find no difference in the stellar mass-size relation for very isolated and less isolated early-type galaxies. However, late-type isolated galaxies would be ~1.2 times larger or would have ~44% less stellar mass than spiral galaxies in denser environments. We rejected the second explanation since the increase in the SFR caused by an interaction cannot explain the difference in stellar mass found here.

To check the environmental dependence of the stellar mass-size relation for each Hubble spiral subtype, we compared our data with the sample of Nair & Abraham (2010), which has no selection of environment and visually classified morphologies. Both samples were divided into 6 morphological ranges (E/S0, Spirals, Sb, Sbc, Sc, and Scd-Sdm) and 5 stellar mass bins between log(M*)=[9, 11.5]. The results are presented in Fig. 1. 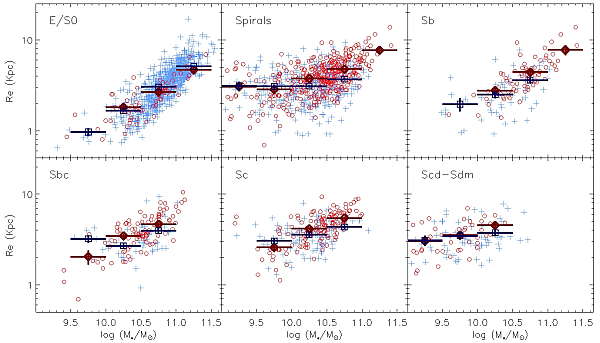 Fig 1. Stellar-mass size relation for galaxies in the AMIGA (red points) and the Nair & Abraham (2010) (blue crosses) samples. The mean half-light radius in each mass bin (represented by the error bars) for the AMIGA (red diamonds) and the Nair & Abraham (2010) samples (blue squares), are shown for each morphological type. The Re error bars represent the standard error in the mean in each case.

In all cases the relation is better defined and has less scatter for the isolated galaxies. We find that as the morphological type becomes later the galaxy size (for a fixed stellar mass range) becomes larger. In the case of the less massive spirals (log(M*)<10), no significant difference is found at 1σ level for AMIGA galaxies compared with similar objects in denser environments. However, the high-mass AMIGA spirals (10*)<11) present a clear difference >3σ when comparing with the Nair & Abraham (2010) sample. This difference is found for all spiral types in the sense that they are larger than objects in denser environments.

The fact that isolated late-type galaxies in our sample are systematically larger than similar mass objects in other environments indicates that there is an environmental dependent process causing the larger sizes of isolated spirals. One possible explanation is that spiral galaxies in low density environments are the norm while such extended disks do not survive in higher density environments. Another possibility for the larger sizes found in this work would be that AMIGA galaxies have accreted more satellite galaxies and as a consequence of this local accretion have created a local deficit of satellites. To check the influence of the local environment, we calculated the number of neighbors within 3 magnitudes of difference at a distance less than 250 kpc from the galaxy (satellites) for both the AMIGA and the Nair & Abraham (2010) samples. Then, we calculated the mean size value for galaxies in the stellar mass range [10-11] for the AMIGA sample, the Nair & Abraham (2010) sample of galaxies having zero or one satellite, and the Nair & Abraham (2010) galaxies with 2 or more satellites. The results are presented in Fig. 2. 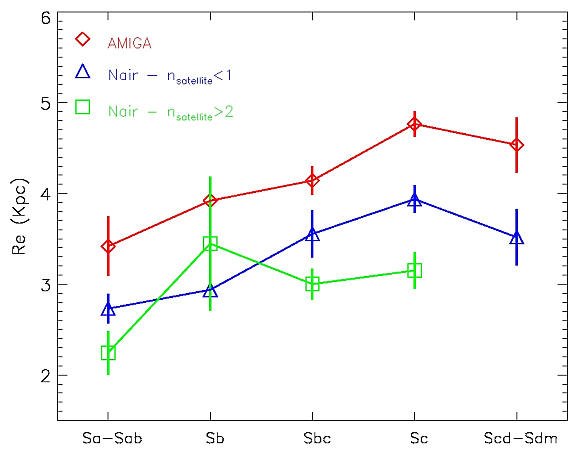 In the three cases we find that spiral galaxies become larger as they become later types. Galaxies in the Nair & Abraham (2010) sample with no or one satellite are larger than those with two or more satellites for almost all morphological types. In all cases, the mean size of our isolated galaxies remains even larger than objects without satellites in the Nair & Abraham (2010) sample.