Environmental effects on galaxies in the Catalogue of Isolated Galaxies: physical satellites and large scale structure

Environmental effects on galaxies in the Catalogue of Isolated Galaxies: physical satellites and large scale structure

We present a study of the 3D environment for a sample of 386 galaxies in the Catalogue of Isolated Galaxies (CIG; Karachentseva 1973), using the Ninth Data Release of the Sloan Digital Sky Survey (SDSS-DR9). We aim to identify and quantify the effects of the satellite distribution around a sample of galaxies in the CIG, as well as the effects of the large-scale structure (LSS).

To recover the physical satellites around the CIG galaxies, we first focused on the satellites that are within the escape speed of each CIG galaxy. The escape speed has a characteristic trumpet shape (caustic; Kaiser 1987; Diaferio & Geller 1997) under which the satellite galaxies would be captured. Above the caustic, the neighbour galaxies possess a velocity sufficient to evade the gravitational attraction of the primary galaxy and are not captured, although fly-by interactions may influence the structure and evolution of the primary galaxy. To take into account the potential effect of fly-by encounters, we develop a more conservative method to recover most of the galaxies which have interacted with the CIG galaxies: a stacked distribution of the absolute values of the radial velocity difference between the projected neighbour galaxies and the central CIG galaxies (∆v=v_neigh − v_CIG). A Gaussian distribution with σ = 105 km/s appears for velocity differences smaller than 300 km/s. We also checked that the neighbour galaxies within 3σ show a strong tendency to gather in the inner 0.3 Mpc around the CIG galaxies. Hence, the satellite galaxies selected by the Gaussian distribution are all neighbour galaxies with |∆v| ≤ 315 km/s and lie at a distance smaller than 0.3 Mpc. This method provides an upper limit on the quantification of the local environment, since more galaxies will be considered as satellites than with the escape-speed method.

We defined the projected number density parameter at the fifth nearest neighbour to characterise the LSS around the CIG galaxies. We find that the CIG galaxies are distributed following the LSS of the local Universe, although presenting a large heterogeneity in their degree of connection with it. To evaluate the role of the physically bound satellites with respect to the large-scale environment, we compared the magnitudes of the sum of the tidal forces produced by the physical companions to the sum of the tidal forces engendered by all the galaxies in the LSS. When at least one physical companion is present near a CIG galaxy, its effect largely dominates (typically more than 90%) the tidal forces generated by the LSS. Although 15% at most of the CIG galaxies in the sample have physically bound satellites, almost all galaxies (97%) can be directly related to an LSS. The very large scatter in the quantification of the LSS shows that the CIG includes both galaxies dominated by their immediate environment and galaxies almost free from any external influence. 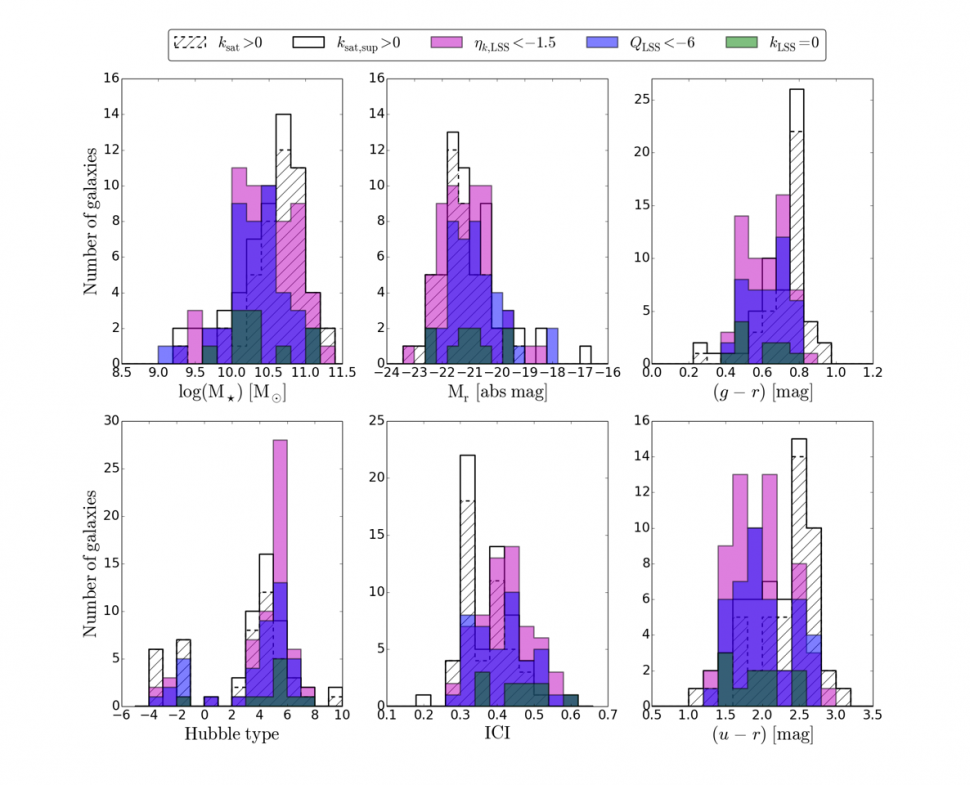 CIG galaxies with companions might have a mild tendency to be more massive, which suggests a higher frequency of having suffered a merger in the past. Satellites are in general redder, brighter, and bigger for more massive central CIG galaxies. In addition, massive elliptical and lenticular CIG galaxies tend to have satellites with earlier types than similar-mass spiral CIG galaxies.

As mentioned, the CIG samples a variety of environments, from galaxies in interaction with physical satellites to galaxies without neighbours in the first 3 Mpc around them. Hence, in the construction of catalogues of galaxies in relation to their environments (isolated, pairs, triplets, groups of galaxies), redshift surveys are required to distinguish small, faint, physically bound satellites from a background- projected galaxy population and reach a more comprehensive 3D picture of the surroundings.