The Catalogue of Isolated Galaxies

The catalogue is composed of 1051 objects with apparent Zwicky magnitude mzw brighter than 15.7 and declination > -3°. Karachentseva visually inspected the Palomar Sky Survey prints, trying to identify those galaxies in the Catalogue of Galaxies and Clusters of Galaxies (CGCG, Zwicky et al. 1968) which have no near similar size neighbours. Primary galaxies with angular diameter Dp are considered isolated if any neighbour with diameters Di (with Dp/4 ≤ Di ≤ 4Dp) has an apparent angular separation Rip, from the primary galaxy, greater than 20Di.

This criterion statistically implies that all possible effects of a past interaction on the morphological or dynamical properties of a CIG galaxy, or those concerning the enhancement of star formation processes, have likely been erased at the present time. Because this represents a lower limit on the time since the last interaction between a CIG galaxy and a potential neighbour, the CIG galaxies have apparently been isolated for much (if not all) of their existence. For instance, for a CIG galaxy with Dp = 3′, no neighbour with Di = 12′ may lie within 240′ and no neighbour with Di = 0.’75 may lie within 15′. If one assumes an average Dp = 25 kpc for a CIG galaxy and a typical “field” velocity V = 150 km s-1 then an approximately equal mass perturber would require 3×109 years to traverse a distance of 20Di (Stocke 1978).

This is a conservative criterion in the sense that, since no redshift data is used for the isolation definition, a truly isolated galaxy may be excluded from the CIG due to a projected background/foreground neighbour: galaxies isolated in space do not necessarily appear isolated in the sky. As a result of these projection effects the CIG is not fully complete. Nevertheless, the sample is still reasonably complete, according to the Schmidt (1968) luminosity volume test which gives = 0.42 at a Zwicky magnitude of 15.0 (Huchra & Thuan 1977, Xu & Sulentic 1991, Toledo et al. 1999, Verdes-Montenegro et al. 2005). On the other hand all galaxies that are included should be isolated. The CIG is a sample of galaxies isolated from similarly sized neighbours, but it is clear that dwarf neighbours are not excluded.

Various visual revisions have been performed by several authors, but we have chosen to improve Karachentseva’s sample by checking in an automated, homogeneous way the isolation of the galaxies and by listing/classifying the neighbour galaxies. We have excluded from our revision all the CIG galaxies with radial velocities lower than 1500 kms−1 (100 galaxies) since, as pointed out by Stocke (1978) and Haynes & Giovanelli (1984), the area searched for potential neighbours of nearby CIG galaxies is spread over a large surface on the sky, which makes the search overwhelming. Our final target sample is composed of 950 CIG galaxies.

We developed an original method to check the isolation of the CIG galaxies. Digitised POSS-I E images were analysed out to a minimum projected radius R ≥ 0.5 Mpc. We have assembled a software pipeline for producing star/galaxy catalogues in the area around each CIG field. We used SExtractor (Bertin & Arnouts 1996) to detect the sources in the images. The images were reduced using AIMTOOL in LMORPHO (Odewahn 1995, Odewahn et al. 1996, 2002), and a Graphical User Interface (GUI) driven star/galaxy separation procedure was used to classify detected sources as: STAR, GALAXY or UNKNOWN (for the faint, low resolution sources). Star/galaxy separation was performed in the log(area) vs. magnitude (SExtractor MAG ISO), which was found to robustly isolate the stellar locus brighter than MB ~ 17.5 in a random sample of Schmidt plates. A typical star/galaxy separation parameter plane from a POSS-I E image (CIG 714) is shown in Fig. 1. 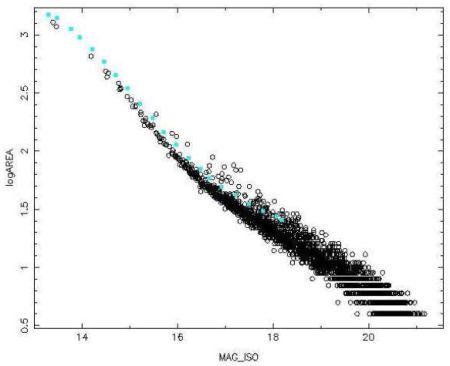 The galaxies have a lower surface brightness than the stars and in the log(area) vs. magnitude plane, the two classes of objects fall in different loci (Leon et al. 2000). The stellar locus in log(area) vs. magnitude plane was manually located using an interactive GUI approach because the shape and location of this locus changes significantly on different POSS-I Schmidt plates. All the points that lie above the curve defined by the blue filled circles (which is described with a cubic spline) were classified as GALAXY. The points below this curve were classified as STAR. Points lying outside the spline range (brighter or fainter in magnitude than the extent of the red points) were classified as UNKNOWN. As a final step, we archived our catalogues in the form of ASCII files.

One of us (S. V.) systematically verified all the objects (GALAXY, STAR and UNKNOWN) and changed the types if needed. This task was very time consuming as the mean number of objects detected amounted to 4000 per single 55′ × 55′ field (up to 14 000 at low galactic latitude). Finally, we also used POSS-II red (IIIa-F) plates of all our GALAXY objects to perform a second check of our final catalogues of neighbours (55 154 stamps, visually checked by L. V.-M.)

We have performed a systematic study to list all the projected neighbours, down to a magnitude m ~ 17.5, lying within 0.5 Mpc around the CIG galaxies. Our conclusions are the following: 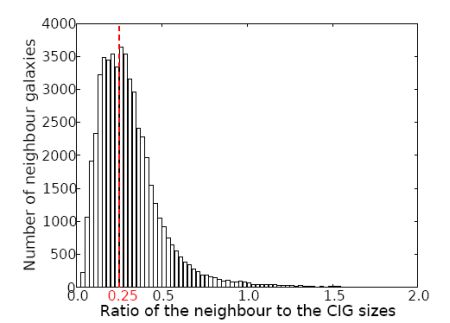