Verley et al. 20007a we performed a careful reevaluation of the degree of isolation of the CIG. The presence of candidate neighbours, in a different number and with different sizes and magnitudes in the environments of CIG galaxies, leads us to go a step further. We have quantified the degree of isolation of CIG galaxies according to different and complementary parameters, that produce a well characterised picture of their environment.

During the past forty years it has become clear that galaxy structural properties and evolution can be driven as much by environment as by initial conditions, even if the details of environmental influence are not yet well quantified.

Verdes-Montenegro et al. 2005). The observed physical properties of these systems are expected to be primarily determined by initial conditions and subsequent secular evolutionary processes.

We used the SDSS-DR9 photometric and spectroscopic databases to re-evaluate the degree of isolation of 636 galaxies in the Catalogue of Isolated Galaxies (CIG; Karachentseva 1973). This re-evaluation using CCD images and spectra continues and improves upon the work of Verley et al. (

b) which was based upon the digitised photographic plates from Palomar Sky Survey (POSS-1 and POSS-2).

We developed an automatic method to search for neighbours near to each primary galaxy in order to revise the CIG isolation criteria introduced by Karachentseva (1973). We used the SDSS-DR9 to search for neighbours within a projected physical radius of 1 Mpc, which doubles the radius used in previous AMIGA studies. We first applied the CIG isolation criteria within 1 Mpc to the SDSS photometric database. Using the SDSS spectroscopic database, we then refined the study for 411 fields where 80% of the extended neighbours down to mr < 17.7 mag lying within a projected separation of 1 Mpc from the CIG galaxy have a measured redshift.

Of the 636 CIG galaxies considered in the photometric study, 426 galaxies appear to be isolated in projection: 86 CIG galaxies were found to be isolated according to the CIG isolation criteria within a projected field radius of 1 Mpc; 340 appear to be mildly affected by their environment. The use of the SDSS database permits one to identify faint companions that were not found in previous AMIGA studies (

Verley et al. 2007a). The SDSS provides linear photometry, improved sensitivity, and better spatial resolution than digitised photographic plates. Consequently, the isolation parameters of the revised AMIGA sample are improved, and reduce the sample by about 20%.

Surprisingly, the velocity difference distribution shows a peak close to |∆v| = 0 km s−1 (see Fig. 2). From the figure, we are able to separate a flat continuum distribution of foreground/background neighbours.  Thisallows us to statistically separate galaxies that are not linked to the central galaxy from likely physical satellites.. More than one third of the neighbours within |∆v| ≤ 3000 km s-1 have a velocity difference |∆v| ≤ 250 km s-1 (36%, see Fig. 2). In order to recover all of these probable physical companions, we adopted a conservative velocity difference selection from the figure, that a CIG galaxy fulfils the CIG isolation criteria if it has no neighbour violating the CIG isolation criteria within 1 Mpc and |∆v| ≤ 500 km s-1 (see also Elyiv et al. 2009; Karachentseva et al. 2010, 2011).

Of the 411 fields considered in the spectroscopic study with more than 80% redshift completeness, we find that 347 galaxies are isolated according to the CIG isolation criteria within a radius of 1 Mpc and |∆v| ≤ 500 km s-1 with respect to the central CIG galaxy.

The availability of the spectroscopic data allowed us to check the validity of the CIG isolation criteria within a field radius of 1 Mpc, which is not fully efficient. About 50% of the neighbours considered as potential companions in the photometric study are in fact background objects. On the other hand, we also found that about 92% of neighbour galaxies that show recession velocities similar to the corresponding CIG galaxy are not considered by the CIG isolation criteria as potential companions. These neighbours are most likely dwarf systems, with Di < 0.25 DP , which may or may not have a considerable influence on the evolution of the central CIG galaxy. 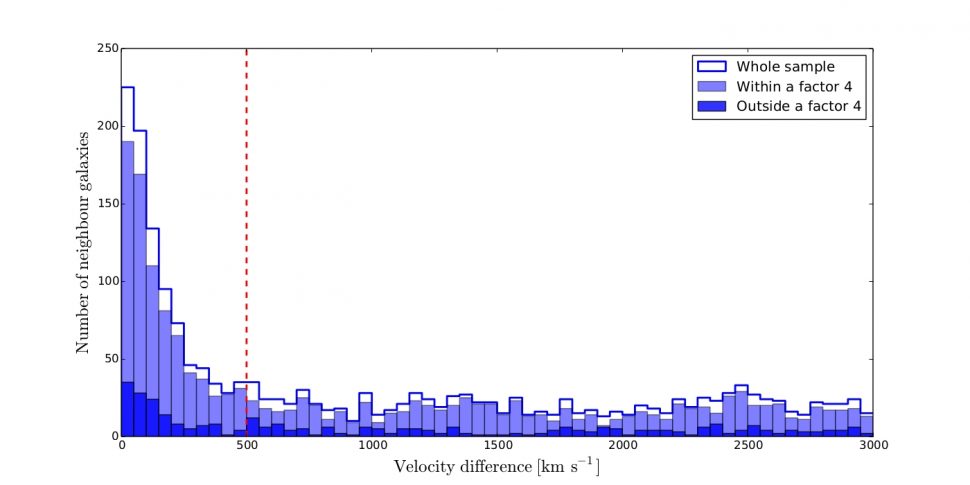 Fig. 2 Comparison of the velocity difference distributions |∆v| for neighbour galaxies with respect to the central CIG galaxy (411 fields): for the neighbour galaxies violating the CIG isolation criterion about a factor 4 in apparent diameter with respect to their associated CIG galaxy; for the remaining neighbours (outside the factor 4 in apparent diameter);and for the whole sample of neighbours (sum of the previous two samples).  The vertical line corresponds to the selected value of reference at |∆v| = 500 km s−1.