Catalogues of isolated galaxies, isolated pairs, and isolated triplets in the local Universe

Catalogues of isolated galaxies, isolated pairs, and isolated triplets in the local Universe

It has long been known that galaxies are distributed in a hierarchical structure of filaments and walls, which surround large voids (Choi et al. 2007; Hoyle et al. 2012; Pan et al. 2012). More than half of the galaxies (54%) in the local Universe appear concentrated in virialised groups and clusters (Courtois et al. 2013). Another 20% of galaxies are located in collapsing regions around groups and clusters (Tully 1987; Crook et al. 2007; Makarov & Karachentsev 2011). The remaining populations of galaxies (26%) are referred to as “field” galaxies. A small fraction of these galaxies can be found in loose pairs and compact groups (Xu & Sulentic 1991; Karachentseva et al. 2011). The fraction of isolated galaxies (galaxies that have not been appreciably affected by their closest neighbours during a past crossing time t cc ≈ 3 Gyr, Verdes-Montenegro et al. 2005) is still uncertain.

The new 3-dimensional (3D) surveys permit small, faint, physically bound satellites to be distinguished from a background-projected galaxy population, giving a more comprehensive 3D picture of the surroundings. We aim to provide representative samples of isolated galaxies, isolated pairs, and isolated triplets for testing galaxy evolution and secular processes in low density regions of the local Universe, as well as to characterise their local and large-scale environments.

We present the SIG, SIP, and SIT catalogues of isolated galaxies, isolated pairs, and isolated triplets in the local Universe (z ≤ 0.08 and m r ≤ 15.7 mag). They were automatically and uniformly selected using the SDSS-DR10. These systems show no known neighbours within ∆ ≤ 500 km s −1 and radius R = 1 Mpc. Isolation degree as defined in this study is more conservative than the previous definition connected with the CIG sample. All the systems in the three final catalogues were visually inspected.

As the previous work of Argudo-Fernandez et al. (2014), the velocity difference of pairs and triplets follows a Gaussian distribution. This Gaussian distribution shows that pairs and triplets are already virialised and suggests that they did not form by chance unless the captures occurred at a primordial epoch. These pair and triplet samples should then shed light on the effects of secular evolution of galaxies in interaction with respect to isolated galaxies or galaxies just temporarily affected by some fly-by companions.

The SIG catalogue of isolated galaxies is composed of 3,702 galaxies with no neighbours within ∆v ≤ 500 km/s in a field radius of 1 Mpc. The SIP catalogue of isolated pairs contains 1,240 pairs, which were selected using the requirement that the faintest galaxy should be within ∆v ≤ 160 km/s and lie at a distance d ≤ 450 kpc with respect to the brightest one. Similarly, the SIT catalogue of isolated triplets consists of 315 triplets, selected under the condition that the two faintest galaxies satisfy ∆v ≤ 160 km/s and lie within d ≤ 450 kpc of the brightest galaxy. The sample of isolated galaxies, pairs and triplets represent about 11%, 7%, and 3% of the total number of galaxies in the local Universe respectively. In comparison with the existing literature, the SIG, SIP, and SIT catalogues of isolated galaxies, isolated pairs, and isolated triplets represent particularly useful samples for studies of both one-on-one and the large-scale effects on galaxy properties.

To quantify the effects of their local and large-scale environments, we computed the projected density and the tidal strength for the brightest galaxy in each sample. To understand the effects of the large scale environment on galaxy properties, we characterise the LSS around each primary galaxy up to 5 Mpc. The left panel in Fig. 1 show that there is no difference in their relation with the LSS between the three samples. This means that the isolated galaxies are as isolated, with respect to the large scale environment, as the isolated pairs and triplets. This suggests that these systems have a common origin in their formation and evolution. When taking into account also the physical associations of the galaxies in pairs (B) and triplets (B, C), i.e. Qtotal, we see that their effects largely dominate (about 99.9%) the tidal strengths generated by the LSS. This local tidal strength due to the physical companions is two orders of magnitude higher than the tidal strength due to the LSS (see the right panel in Fig. 1). Therefore, the effects of the LSS are negligible in contrast to the effect of one-on-one interactions. 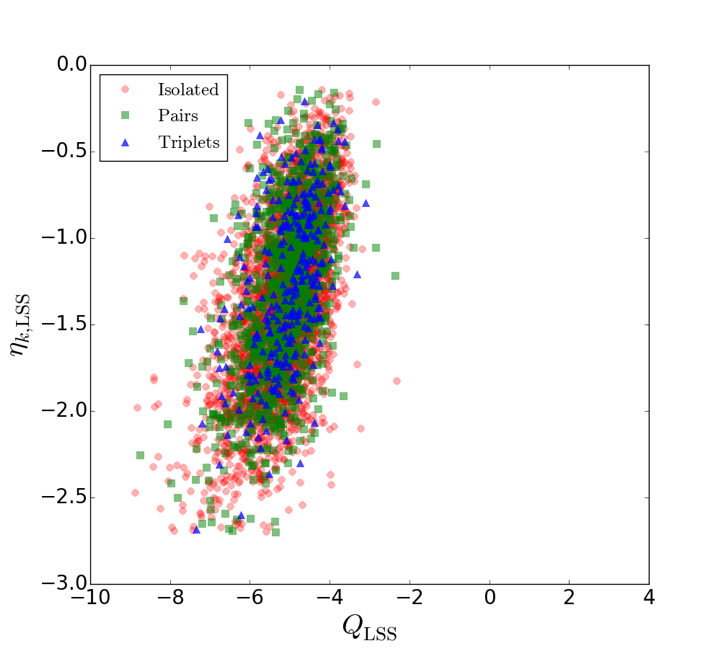 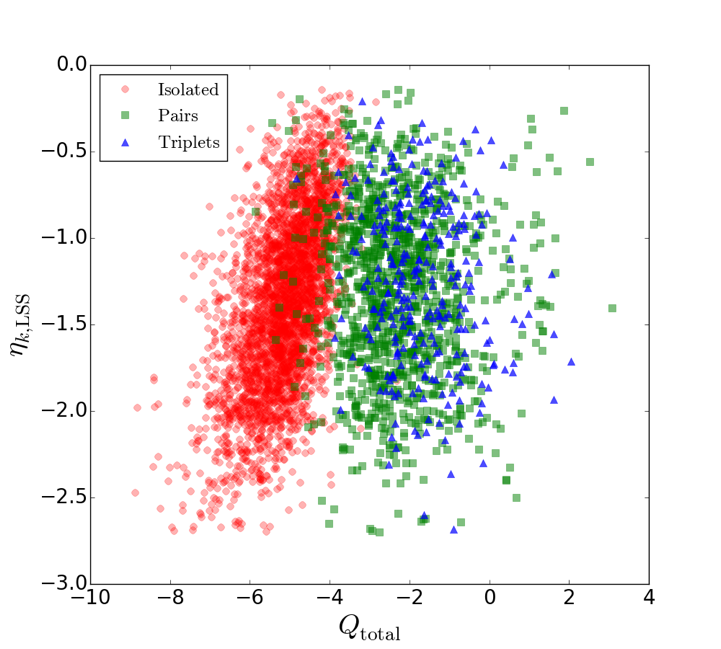 We find very few galaxies with no neighbours within ∆v ≤ 500 km/s up to 5 Mpc. One can expect that these galaxies would be located in voids. The smallest identifiable voids in the local Universe have radii ∼ 7 h −1 Mpc (Tikhonov & Karachentsev 2006), with voids usually having characteristic radii of 10-40 h −1 Mpc (Sutter et al. 2012). Nevertheless, we checked that in general, most of the isolated galaxies, isolated pairs, and isolated triplets belong to the outer parts of filaments, walls, and clusters, and that they generally differ from the void population of galaxies. To visualise this, we have developed interactive visualisation tools based on open source code. The visualisation tools allow one to compare the 3D positions of a sample (or samples) of isolated systems with respect to the locations of the LSS galaxies in their local and/or large scale environments. The code is available at https://github.com/margudo/LSSGALPY.

In addition, to further explore the difference with void galaxies, we compared our catalogue of isolated galaxies with the public catalogue of voids compiled by Pan et al. (2012), based on SDSS spectroscopy. We find that 33% of our isolated galaxies are located in voids. This result is expected since the relation of the radius where isolation is defined (1 Mpc) with respect to the typical size of regular clusters (from 1 to 10 Mpc) is much smaller than the relation with the typical radius of voids in the Universe (24 Mpc). Additionally, we found that only 14% of void galaxies, within the same limited volume as our primary sample are in isolation according to our criteria. This result reinforces the argument of the different natures of void and isolated galaxies.

The catalogues, with galaxy positions, redshifts, and degrees of relation with their physical and LSS environments, are publicly available to the scientific community.