Molecular abundances in the ISM have been shown to be imprinted by the different activity types in the nuclear region of galaxies. While most molecular studies to date are focused in bright and active interacting galaxies, in this pilot study the molecular chemistry is proben for the first type in a rather isolated galaxy, namely CIG 638.

With the aim to find molecular differences which are unique to galaxies in isolation we carried out deep (22 hours) observations with the IRAM 30m which resulted in the detection of CCH, HCN, HCO+ and HNC. We have shown that the relative abundance ratio of CCH/HCO+, which shows no major variations in other galaxies where these species have been detected, is clearly high in CIG 638.

This high abundance ratio can be explained either by a deficiency of dense molecular gas resulting in low HCN and HCO+ column densities or by a rather uniform distribution of the molecular ISM with a lower visual extinction (lower clumpiness) where the CCH would be overproduced by the UV radiation in a mostly unshielded medium. Both explanations could be attributed to the naturally unperturbed ISM CIG 638, as compared with other strongly interacting active galaxies. 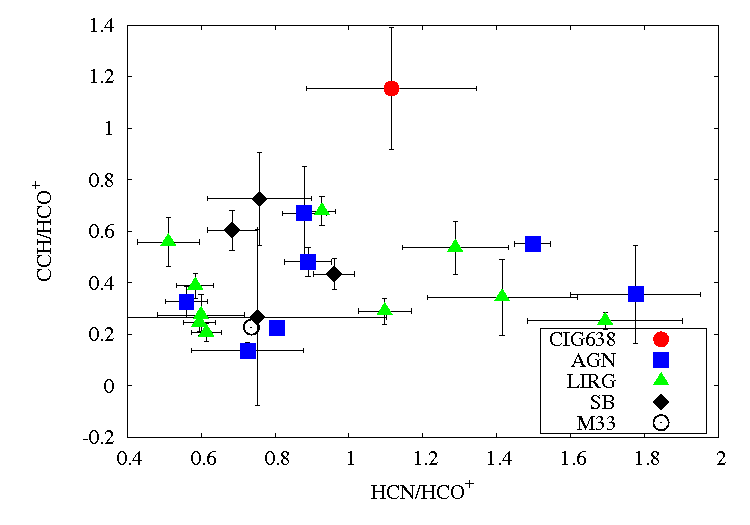