During preparatory work on the survey we searched for CIG positions in the SIMBAD database and noticed shifts with respect to the central positions of the galaxies, reaching in some cases up to several tens of arcseconds. This fact not only prevents accurate pointings for reduced fields of view, but also makes cross-identifications with other available catalogs more diffiult. We then searched the Updated Zwicky Catalogue (UZC; Falco et al. 1999) whose accuracy peaks at 1″ with a width of 1″.45, as estimated after matching with the FIRST 1.4 GHz catalog (White et al. 1997). Still in a preliminary exploration mode we found CIGs with positional errors larger than 10″ in the UZC. This motivated us to revise the positions of the entire CIG in a systematic way. We decided to provide positions for the entire catalog without consideration of any isolation criterion.

We obtained Digitized Sky Survey (DSS) red images of all CIG galaxies in J2000 coordinates, with pixel sizes of 1″.2 and 6′ x 6′ fields. The images were analyzed in an automatic procedure using the SExtractor software (Bertin & Arnouts 1996) for sources brighter than 4σ the background level. Those closer to the original CIG position were automatically selected but later revised visually in order to confirm that we had targeted the right galaxy. The internal error of the position fit is better than 0.”05.

Once the automatic process was done, a visual check of the SExtracted positions was performed for all the galaxies. We calculated the differences found in α and δ between our estimated positions and those obtained from SIMBAD (Fig. 1 and 2). 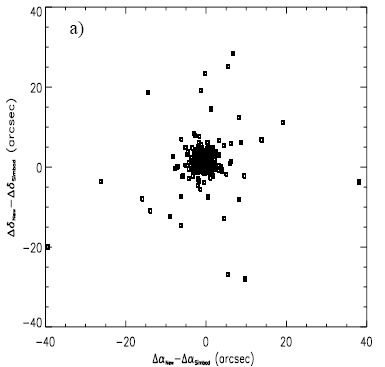 Fig. 1 Differences between our measured positions and those retrieved from SIMBAD for the CIG galaxies. 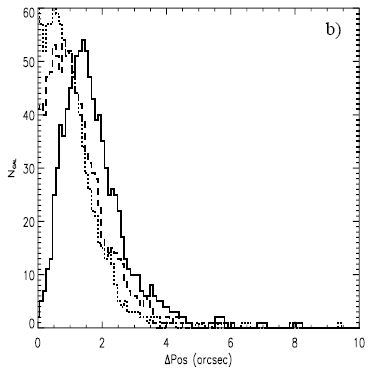 Fig. 2 Histogram of the difference between the new positions and the SIMBAD positions for the α (dotted line), δ (dashed line) coordinates and the total distance (solid line) in arcsec. The plotted range is restricted to 10″ for clarity of the plot.

Taking into account the internal error from SExtractor and the error from astrometry, these new positions are correct within an error of ~0.”5 for 90% of the CIG galaxies. For the rest of galaxies the errors are linked with late morphological types that required an interactive reprocessing of the data.

The new positions are available in electronic form at the CDS or in our public database.