In Sulentic et al (2006) we have performed a complete refinement of the optical morphologies for galaxies in the Catalog of Isolated Galaxies. Uniform reclassification using the digitized POSS II benefited from the high resolution and dynamic range of that sky survey. Comparison with independent classifications made for an SDSS overlap sample of more than 200 galaxies confirms the reliability of the early vs. late-type discrimination and the accuracy of spiral subtypes within ΔT = 1-2. CCD images taken at the Observatorio de Sierra Nevada were also used to solve ambiguities in early versus late-type classifications.

We show in Fig. 1 some examples. 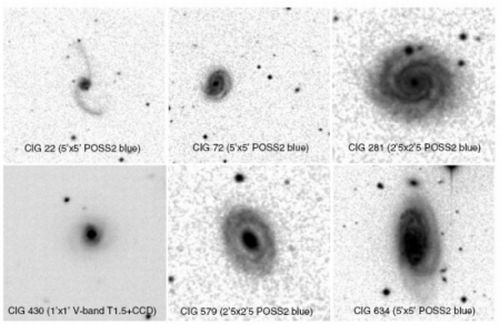 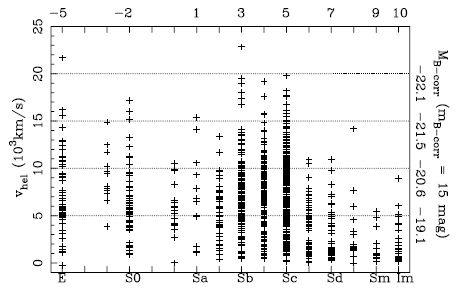 Fig. 2 Distributions of new morphologies as a function of recession velocity (VR) 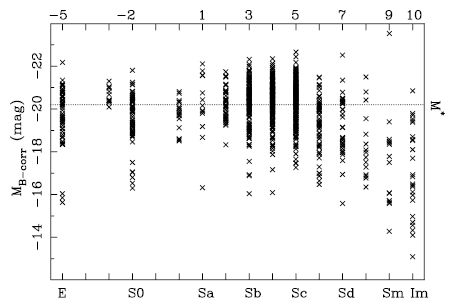 Fig. 3 Distributions as a function of absolute magnitude (MB−corr). The latter are derived from mB−corr (Paper I) assuming H0 = 75 km s−1 Mpc−1 The horizontal dotted line indicates the sample M* derived in Paper I for the most complete part of the CIG between mB−corr = 11 and 15.0 mag.

We show in Fig. 2 and 3 the distribution of morphological types as a function of the recession velocity and absoloute magnitude. This most isolated sample of galaxies in the local Universe is dominated by two populations: 1) 82% are spirals (Sa–Sd) with the bulk being luminous systems with small bulges (63% between types Sb–Sc) and 2) a significant population of early-type E–S0 galaxies (14%). Most of the types later than Sd are low luminosity galaxies concentrated in the local supercluster where isolation is difficult to evaluate. The late-type spiral majority of the sample spans a luminosity range MB−corr = −18 to −22 mag. Few of the E/S0 population are more luminous than −21.0 marking the absence of the often-sought super L∗ merger (e.g. fossil elliptical) population. The rarity of high luminosity systems results in a fainter derived M* for this population compared to the spiral optical luminosity function (OLF).

The E–S0 population is from 0.2 to 0.6 mag fainter depending on how the sample is defined. This marks the AMIGA sample as unique among samples that compare early and late-type OLFs separately. In other samples, which always involve galaxies in higher density environments, M∗E/S0 is almost always 0.3–0.5 mag brighter than M*S, presumably reflecting a stronger correlation between M* and environmental density for early-type galaxies.