We have performed a Fourier photometric decomposition of a representative sample of ∼ 100 isolated CIG galaxies (Catalog of Isolated Galaxies; Karachentseva 1973) in the morphological range Sb-Sc. This study complements the photometric analysis presented in our previous paper (Durbala et al. 2008) for the same sample of disk galaxies by allowing a description of the spiral structure morphology. We also estimate dynamical measures like torque strength for bar and spiral, and also the total nonaxisymmetric torque by assuming a constant M/L ratio, and explore the interplay between the spiral and bar components of galaxies. 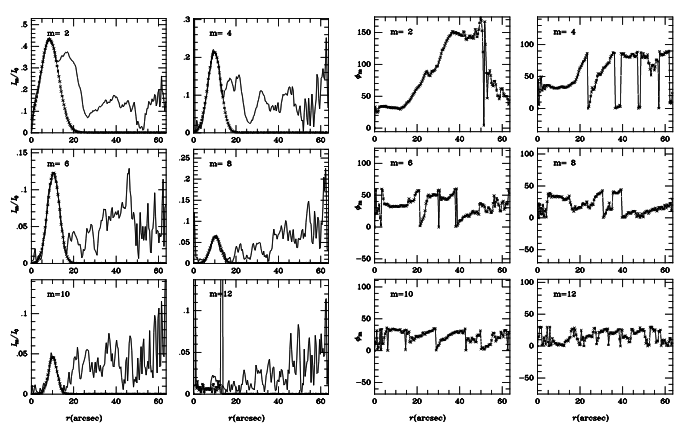 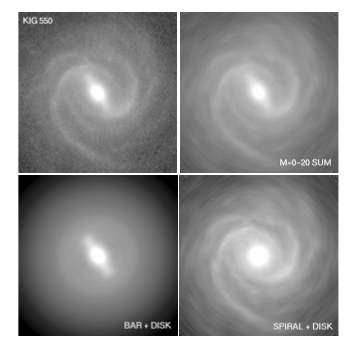 Both the length (lbar) and the contrast (e.g. A2b) of the Fourier bars decrease along the morphological sequence Sb-Sbc-Sc, with bars in earlier types being longer and showing higher contrast. The bars of Sb galaxies are ∼ 3× longer than the bars in Sc types, consistent with our previous study (Durbala et al. 2008). We find that the longer bars are not necessarily stronger (as quantified by the torque Qb measure), but longer bars show a higher contrast A2b, in very good agreement with theoretical predictions. Our data suggests that bar and spiral components are rather independent in the sense that the torque strengths of the two components are not correlated. The total strength Qg is a very reliable tracer of the bar strength measure Qb, the two quantities showing a very tight linear correlation. Comparison with a similar sample of disk galaxies (same morphological range) extracted from the OSUBGS (Ohio State University Bright Galaxy Survey; Eskridge et al. 2002) survey indicates that the isolated CIG/AMIGA galaxies host significantly longer Fourier bars and possibly show a different distribution of spiral torque Qs. The Fourier analysis also revealed a potential case of counterwinding spiral structure (KIG 652/NGC 5768), which deserves further kinematic study. We find that m = 2 (i.e. dominating two-armed pattern) is the most common spiral arm multiplicity among the sample of Sb-Sc CIG/AMIGA galaxies (∼ 40%), m = 2 & 3 and m = 1 & 2 are found in ∼ 28% and ∼ 13% of isolated galaxies, respectively.