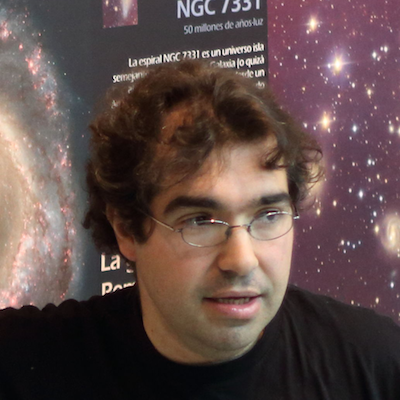 I graduated in Theoretical Physics from the Autonomous University of Madrid in 2004 combining the studies with a grants and contracts in the Didactics Department of the Spanish National Museum of Science and Technology. In 2015 I moved to Granada to work in my PhD at the Instituto de Astrofísica de Andalucía (IAA-CSIC) with Miguel Cerviño and Valentina Luridiana. My PhD research focus on the influence of low mass ionizing stellar clusters in the line emission spectra of HII regions and galaxies considering the low-number statistics in the stellar mass distribution in the clusters.

After my PhD I work as Postdoc in the Asteroseismology Group at IAA-CSIC where I learned about variable stars, photometric technics and acquisition and processing data pipelines of Kepler mission.

During my PhD and Postdoc periods I participate in many public outreach activities. On the basis of all my experience as science communicator I started, by the end of 2014, a personal project about astrotourism and science education. One year later the project materialised in a three-partner company, Azimuth, that in 2016 became the official guides company at Calar Alto Observatory. I was the Communication Director in Azimuth since its foundation till I left the company in June 2020.

Since September 2020 I am a proud member of AMIGA team working in coordination and communication tasks.