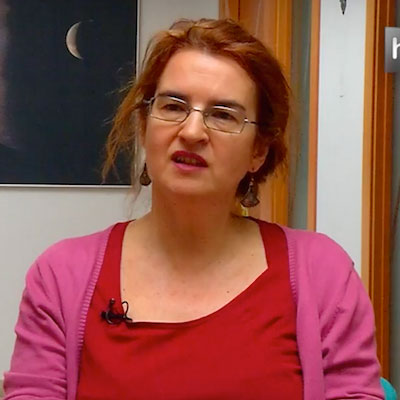 The Hickson Compact Groups (Hickson 1982: HCGs) are characterized by a small number of members (4 to 10) with a low velocity dispersion (σ = 200 km s-1, Hickson et al. 1992). Their projected galaxy densities are extremely high, similar to the cores of dense clusters, but they are found in low galaxy density environments, as a consequence of the isolation criterion used for their selection (Hickson 1982; Sulentic 1987). This combination of high galaxy density in the low density environment makes them unique and interesting laboratories for studying galaxy interaction and evolution.

The origin and the existence of Hickson compact groups constitute a matter of great interest and debate. Their short crossing times argue for short lifetimes, yet few merger candidates or postcursors are found (Zepf et al. 1991; Moles et al. 1994; Sulentic & Rabaça 1994). Diaferio et al. (1994) proposed that compact groups could form continually out of rich groups. Governato et al. (1996) suggest that primordial merger events with ongoing acquisition of intruders might prevent the groups from merging entirely. These models seem at work in HCG 92 (Moles et al. 1997). On the other hand, well isolated groups with no obvious intruders also exist (e.g.

HCG 96 Verdes-Montenegro et al. 1997). Athanassoula et al. (1997) have shown that compact groups with an appropriate arrangement of luminous and dark matter can persist over several hundred million years, in agreement with the analysis of the dynamics of satellite galaxies (Perea et al. 2000).

The characteristics of the interstellar medium in HCGs are also not well understood. Elevated star formation activity induced by tidal interactions and resulting enhancement in FIR and CO emission are expected but not supported by observations (see

Verdes-Montenegro et al. 1998 and references therein). The highly perturbed distributions of the molecular gas in the most CO deficient groups suggest that strong disruptions of gaseous disks and gas stripping by continuous tidal disruption may suppress star formation (

Yun et al. 1997).A detailed analysis of the morphology and the strength of interactions among the HCG galaxies is needed in order to better understand the way these compact groups form and evolve. Studies of neutral hydrogen (HI) can offer valuable insights into the dynamics of galaxy interaction and evolution (e.g. Yun et al. 1994; Hibbard & van Gorkom 1997), and we were motivated to undertake a survey of HI distribution and content for a large sample of HCGs (Williams et al. 1997, 1999; Verdes-Montenegro et al. 2000a,b; Huchtmeier et al. 2000) in order to analyze the type and effect of the interactions that are taking place.

We have analyzed the total HI content of 72 HCGs and found that nearly 60% of the HI is missing in these groups. We further investigated the detailed distribution and kinematics of HI within a subset of 16 groups using high resolution observations obtained using the VLA (

Verdes-Montenegro et al. 2001). The HI deficiency was found to be larger when galaxies were considered individually (76% HI is missing) in agreement with the efficient gas stripping evidenced by HI tails and bridges. Among the 44 groups of our sample observed in X-ray (Ponman et al., 1996), the detection rate of hot gas was higher for the HI deficient groups with respect to groups with a normal HI content (45% versus 18%), independently of the distances or exposure times. Based on these results, we have proposed an evolutionary scenario in which the interstellar medium is removed from individual galaxies and the total HI content in the group would decrease as the groups evolve (VM01). Borthakur+ (2010,2014) using GBT data found a diffuse HI component missed by the VLA increasing with evolutionary stage, more consistent with tidal stripping than with ram-pressure, as X-ray data support (Rasmussen+ 2008, Desjardins+ 2013).


IRAC/Spitzer photometry of HCGs shows a gap in colour-colour space (Johnson+ 2007) suggesting rapid evolution from dusty to dust-free systems, correlating with HI-depletion. This agrees with the bimodality in specific SFR found in Tzanavaris+ (2010) and MoHEG (Molecular Hydrogen Emiting Galaxy, Ogle+ 2010) galaxies have been identified as the rare transition objects. Based on detection of warm H2 emission inconsistent with X-ray heating/AGN activity in 23 HCGs we proposed that shocks might exist in many HCGs induced by galaxies interacting with a cold IGM (Cluver et al 2013). An extreme example is the intergalactic shock of Stefan’s Quintet (HCG92, Appleton et al 2006; Cluver et al 2010) with turbulent motions of ~1000 km/s. As part of a recently started mapping of 12 HCGs in CO(1-0) with CARMA maps, in combination with  [C II] and [O I] observations from Herschel, we have studied HCG57  (Alatalo et al 2014) and found the existence of shocks, consistent with peculiar CO kinematics in HCG 57a with evidences of suppressed star formation, falling a factor of 10–30 below normal galaxies on the Kennicutt-Schmidt relation. This supports shock-induced SF suppression as the explanation for the HCG galaxies falling in the mid-infrared green valley.

We observed HCG 91 with the WiFeS integral field spectrograph and found H II regions with abundance and kinematic offsets in HCG 91c (Vogt et al 2015). VLA-HI observations  suggest that HCG 91c is caught early in its interaction with the other members of HCG 91, and find evidence points towards infalling and collapsing extraplanar gas clouds at the disc-halo interface, providing evidence that some of the perturbations possibly associated with the early pha 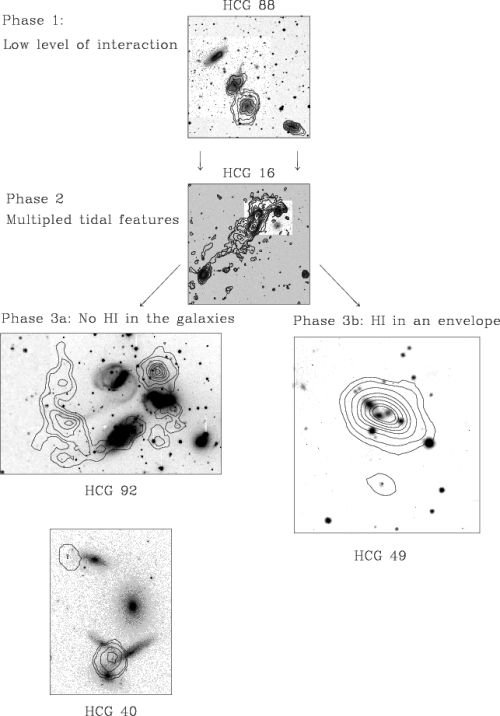