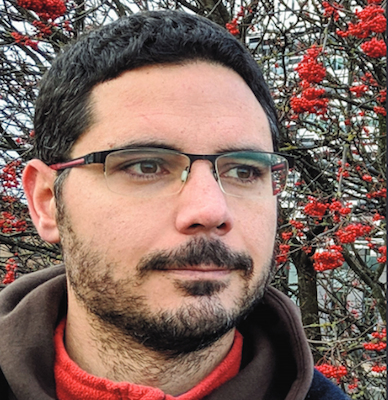 Javier Moldón is a Doctor in Physics from the University of Barcelona and astrophysicist specialized in radio interferometry data. He has led and participated in more than a hundred observation campaigns with various instruments, including multi-epoch and multi-wavelength campaigns and international collaborations. He has published more than ninety scientific articles in peer-reviewed journals in various fields of astrophysics, from transient events in the Galaxy produced by gamma-ray binaries, supernovae, blacks holes and neutron stars to the study of astrophysical processes in extragalactic systems as the connection between star formation and the presence of Galactic Nuclei Assets (AGN), studies of nuclear activity in distant galaxies and the emission of relativistic ejecta by supermassive black holes and disruptive tidal events. He has participated in the commissioning of the LOFAR low-frequency interferometer, in the Netherlands, and has developed the official data processing pipeline of the e-MERLIN interferometer in the United Kingdom. He has experience in instrumentation, data processing algorithms, data analysis, use of workflow management software and reproducible data analysis. He has been been a lecturer to undergraduate, graduate and master’s degrees and professor invited to various schools of interferometry. Since 2019 he works in the scientific operations group of the SP-SRC at the IAA-CSIC, in Granada, also providing training and support to users. He is a member of the SRCSC operations group.